If you are here just to look at the program, choose the C Revamp .d64. It is faster, it allows escaping most commands via RUNSTOP, and it is more likely to recieve updates. The BASIC Revamp .d64 includes both regular and compiled files. 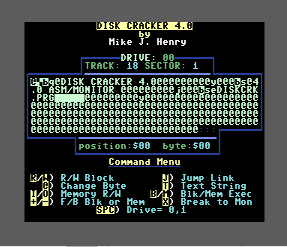 Disk Cracker 4.0 was the first program I encountered that was a hybrid of BASIC and machine language. It was a useful sector editor, but its hybrid design solved the problems I was learning about in school-- how to have a structured, well commented, and easily maintained program without sacrificing speed. It also had some flaws I wanted fixed, so revamping it became my first of many hybrid projects.

Disk Cracker has an odd data window, being 6 lines of 38 characters plus a 7th with the remainder. It isn't ugly, but it tends to obfscate data. A 32x8 rectangle improves clarity of a surprising amount of data. It has commands for going forward and backward by sector, but doesn't know when to change tracks. It also lacks history related forward/backward commands. It's frustrating to be jumping through a file, find exactly what you are looking for, but the next sector is already loading... a way back is crucial. Once, when trying to remove a game's protection, I encountered an offset-based encryption. I decided Disk Cracker needed a way to alter the entire sector by a fixed amount.

I updated DC in 1988 and there it sat, mostly finished, until 2017 when I discovered cc65. I decided to implement it in C, but first I wanted to polish the 1988 hybrid version, which I did. I also stumbled across C64list which I used to finalize the program. This is a mixed blessing. While I like the format that the BASIC source has become, it now lacks a certain nostalgia wrt the wonderful methods I used in the 80's to structure programs. REM statements, ":" characters for extra whitespace, and the almost absurdly simple main program. Now the BASIC is just a crunched version of C64list .txt file. It seems to have lost something in that process.

Here are two screenshots of the revamp (Both C and BASIC versions look the same). You can see that the Disk Cracker track 18 sector 1 is much easier to digest because of the 32x8 window. The second image shows one of the alternative color schemes that mimics Disk Cracker. 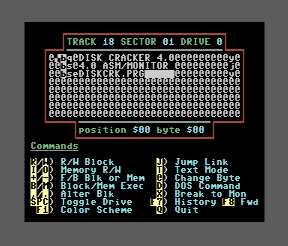 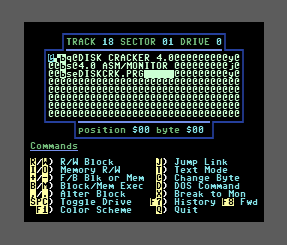