Having recently gotten back into programming my Commodore 64, I discovered the cc65 project. Searching for example code, I came across this page since it included an example of updating the color matrix ($d800). After running the samples there, I became curious about code speed using various tools.

In addition to the color matrix, I was also interested in the screen matrix, so I rewrote it to update the screen text using something like this:

This was a nice first attempt. It produced a rather assembly-like feel compared to the slowness of BASIC, and the resulting program was less than two blocks. In order to improve readability, I decided to run the routine 256 times. That way it would return the screen to a readable state.

I quickly discovered that, although this seemed fast at first, it was still very far from optimized assembly. So I produced 3 versions of the program and wrapped it into a benchmark of sorts. I also wrote BASIC versions in order to fully understand the speed issues. Here is the cc65 compiled program output which tests 3 versions: the straightforward code above, an optimized version (below), and a version using inline assembly. You can't see the screen flickering here, but it's quite a show. Here is the final output: 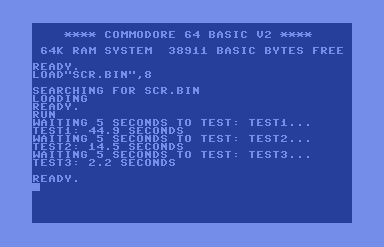 I actually wrote the assembly version second, and came up with the following:

Finally, adapting some of the tricks in the assembly version, I wrote the new C version below. It reduces the time from 44.9 seconds to 14.5 for 256 iterations. Most of the gains come from using a byte for indexing.

Here is a table of speeds for 256 iterations running on an NTSC machine. As you can see, although I was able to improve heavily on my first attempt, C version 1 still trounces the BASIC compilers by an order of magnitude while also producing much smaller code.

** Both BASIC compilers were fastest with BASIC version 1

The BASIC code is interesting. Originally I did only 128 iterations because it had the amusing effect of inverting the entire screen at the time of the run. My original code was a fair bit faster (even doubling to get 256 iterations) because it didn't guard against poking a value greater than 255. I didn't notice the bug because nothing on screen was over ASCII 127 at the time of the run! I only discovered it while trying to produce runtimes for 256 iterations. No, I did not sit there for 1.5 hours running the BASIC tests-- thankfully VICE has warp mode. The crucial line:

had to be replaced with:

resulting in half the speed!

Here are the project files which include scvtest.c for the VIC20.